Our disposal got clogged up…Ick!  and my man BC cleaned it out and got it working right again.  In the process, he had to move a bunch of stuff around from down here:

Under Kitchen Sink Before

So he decided to clear out the entire area, throw a bunch of stuff away, and declutter this area for me.  Yippee!!  What you can’t tell from this picture is there is a whole under cabinet cavern to the right of the trash can that had who knows what stuffed in it.  I guess if this is next weeks challenge I’ll be a step ahead and can focus on the bathroom sink areas.

Under Kitchen Sink After

Okay, on to the real week 4 challenge of the pantry and refrigerator.  The fridge definitely needed help.

I think showing people the inside of my pantry and refrigerator is more personal than showing them my undergarment storage in the closet.  I would rather not be judged by the food in my fridge.   For example, see the giant box of take out chicken in the lower left corner?  At this time of year I keep my sanity by having take out more often and making it last for 3 meals.

Although I haven’t used it much recently my sourdough starter in the front crock is still thriving.

I didn’t think I would have much to do in the pantry since I had recently rearranged my kitchen and did a first pass at simplifying after being inspired by Kath Younger’s Home Neat Home series. Here is a peak at her kitchen. Kath is a great example of how this younger generation has learned more is not better.
Even after that first pass through I knew I had a lot left to do. The spaces were still tight and I didn’t have any room to put some supplies I plan to get to begin my first attempts at canning this summer.
So I started with this.

and ended with this. 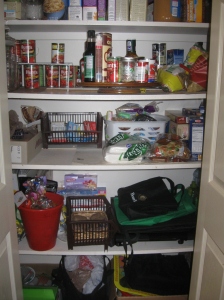 I moved my cookbooks to the book shelf in the master bedroom until I decide which ones to get rid of and which to keep. I kept 3 binders in the kitchen that have the handwritten and favorite recipes in them.  Otherwise I usually use Mealfire.com and Evernotes.com for my recipes and access them on my phone.  These are both free apps you can use on your phone or on a pc without a phone app.  I really love both of these apps.

That left room to rearrange a bit.   I found room to put my reusable grocery bags so they don’t have to hang on on the door knobs.

It’s a start.
The fridge, the fridge. I didn’t do the real thinking part Tsh suggested to figure out what to keep and should we even be eating this.   One of my goals for this year is to eliminate all the store bought dressings and replace with homemade as needed.   That will eliminate a lot of the bottles in the back you can’t even see.

I did clean off the shelves and throw out science projects which became a problem for the one evening the disposal was out of commission but that was short lived. 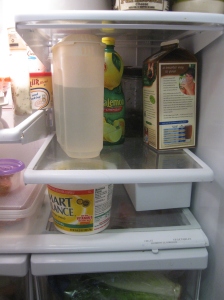 If you want to see how the other ladies faired during Week 4 of Project Simplify, hop over here.

Thanks for stopping by.

4 But when the kindness and love of God our Savior appeared, 5 he saved us, not because of righteous things we had done, but because of his mercy. He saved us through the washing of rebirth and renewal by the Holy Spirit, 6 whom he poured out on us generously through Jesus Christ our Savior, (Titus 3:4-6, New International Version, ©2011)

This entry was posted in Household and tagged clean, declutter, kitchen, organize, pantry. Bookmark the permalink.